*This film was provided to me by Fox Entertainment. All opinions and statements are my own. 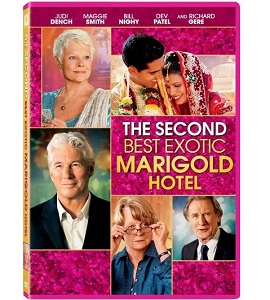 Did you see the first Best Exotic Marigold Hotel movie? I LOVED it. I got it shortly after it was released on Blu-Ray and I have watched it several times. The Second Best Exotic Marigold Hotel brings back all of our favorite players, taking up not long after we left off in the first film. This one isn’t quite as well constructed as the first, but it’s definitely an enjoyable film!

The major new additions to the cast are Richard Gere, David Strathairn and Tamsin Greig. None overshadow the original characters, but rather add a new element (and interest) to the hotel. This story is about letting go of your concerns, finding what you want and ultimately going for it. It’s a fun film that nicely compliments the first.

In this edition, Sonny and Mrs. Donnelly are looking to expand the Best Exotic Marigold Hotel into the premiere location for the retired and/or elderly. Dev Patel has just as much energy as in the first film and Professor McGonagall, I mean Maggie Smith is as crotchety and fun as ever. They truly couldn’t have chosen a more perfect pairing.

Fan favorites Evelyn Greenslade and Douglas Ainslie (Dame Judy Dench and Bill Nighy) are still trying to figure out their relationship and the other guest are all looking for (or dealing with?) love. The performances are honest and fun and will leave your heart warm all the way to the dance at the end. Be sure to add it to the list of films that you want to watch!