Fine Print: I was given a prize pack for review and The Jim Henson Company is giving another to a reader. All opinions and statements below are my own. 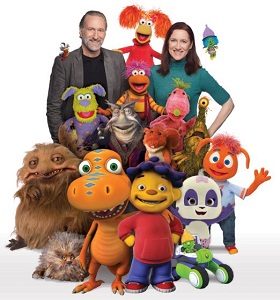 The Jim Henson Company continues to make shows that I know many of you know! They’ve been playing in my home almost daily since my son was one or two years old!

Dinosaur Train – This four-time Emmy Award-nominated animated series embraces and celebrates the fascination that preschoolers have with both dinosaurs and trains while encouraging basic scientific thinking and skills! Buddy and his friends can be seen daily on PBS KIDS (check local listings).

Doozers – Inspired by the wildly popular characters from the classic Henson series Fraggle Rock, Doozers is a modern series for modern families that encourages kids to design, create and innovate, and all while having a blast playing and learning together. You can watch Doozers on Hulu!

Pajanimals – These four cuddly characters welcome children to play games, sing songs and join them on fun adventures. In every episode, Sweetpea Sue the pony the excitable duck Squacky, the creative cow Cowbella and the optimistic puppy Appollo resolve challenges typically encountered during every preschooler’s day. You can watch Pajanimals on Sprout.

Hi Opie! – Emphasizing education through play, this live-action series follows lovable puppet Opie as he navigates kindergarten alongside his human classmates. This lovable little puppet has lots of real-life friends — that’s what makes kindergarten so much fun! You can watch Hi Opie! on Netflix.

Additionally, the folks at The Jim Henson Company are working on Enchanted Sisters, a new television series based on these fabulous new books that are available now!

Of all of the shows and characters that my children have loved growing up, Sid the Science Kid and Dinosaur Train were among my favorites. Both shows were super educational, family friendly and fun, but honestly, I always found myself learning something new and in the most gentle way possible. I LOVE that kind of message! The new videos available, like Dinosaur Train “Buddy’s Halloween Adventure” and Sid the Science Kid “Sid’s Spooky Halloween” will have those lessons (why are spiders expert engineer web builders?) continuing without them even knowing it!

To enter this giveaway, complete any or all of the options listed below. Giveaway ends 10/20. Good luck!