Fine Print: I was given a tickets for review. All opinions and statements below are my own. 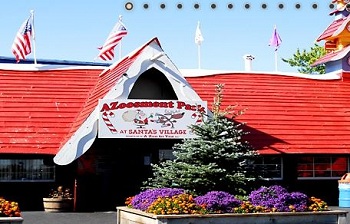 It’s summer and – in Chicagoland – that means that Santa’s Village is open! Santa’s Village Azoosment Park is located in East Dundee, about 25 miles out of the city, right off of I-90. For my family, going to Santa’s Village was a staple growing up and my brother and I would look forward to visiting each summer.

This year, Santa’s Village has introduced a huge new ride called the Wildcat Roller Coaster, which is more of an adult-themed roller coaster than anything they have had in the past, but still fine for children. This is a large, multi-level coaster that has two decent-sized drops and is great fun for your adventurous kids. They also still have favorites like the Dracor Dragon Coaster (a small coaster that goes very fast, but no real scary parts), the Tilt-A-Whirl and Santa’s Tree House Slide (a very tall slide) that your kids will love.

My kids and our friend were all about these rides as well as the Aladdin’s Funhouse (which they went through three different times – compare this to the Fun House at the end of the movie Grease. It’s very similar) and the bumper cars. We all went on the bumper cars once and then the two boys went on a second time. In the middle of the ride, I noticed that my son appeared to have gotten hurt, as did a girl in another car. I think they just collided very hard (the sign says that you are not to bump head-on, so the park is trying to instruct away from potential issues), but I’m not sure exactly how they hit. What really made an impression on me was how the operator of the ride kept his eye on both the children and me. He asked me directly if he should stop the ride and did it immediately. He was very aware of the riders, which was much appreciated. My son was fine after a few minutes, as was the little girl.

I did have a few concerns while I was at the park and I expressed these to Santa’s Village afterward. They responded with some additional information, so I’m going to let you have all of the information and take from it what you will.

First, there is one main bathroom area in the park. As we played during our time there, I happened up on some Port-O-Potties. I understand having these at festivals or transient carnivals, but I was a bit taken aback at seeing them at a standing theme park. I expressed this to Santa’s Village and this was their response: “The port-o-potties in our park are placed at the end of the park for the convenience of those with little ones who (as we all know can happen on occasion) just can’t wait to get to our bathroom facilities on the other end of the park. Their placement is a response to our customers request for additional bathroom options for those specific situations.  I have asked our operational team to add more check ins.” My take on their response: I’m torn. I know that putting in plumbing and other permanent structures would be a huge expense, but I’m not thrilled at the idea of taking my little ones to a Port-O-Potty when I’ve paid to be at a park for a day. That said, I am glad that they have come up with a solution of sorts.

Second, the large, new coaster has a single bar that pulls down over the laps of the riders. These performed well, so that is not my concern. While my son and his friend rode rides, they pulled the bar down and it locked well around the two of them. However, when I rode rides with my daughter (who is 6, but the average height of an 8 year old with an athletic build), the bar ended at the top of my scrunched lap rather than hers – which left a good six inches between her and the bar. I would have liked for there to have been a separate seat belt or something so that she felt more secure (she was more terrified about this than I was and continued to be scared throughout the ride.) Instead she wrapped my arms around her and we rode the roller coaster that way. I expressed the coaster concern to Santa’s Village and this was their response: “The safety guidelines for this particular coaster indicated seat belts were not necessary as the ride involves no upside down loops or sudden turns. We did, however, elect to add the lap bar as an added comfort measure for riders so they are able to fully enjoy the experience of the coaster.” My take on their response: Again, I’m torn. I appreciate that the park added the bar, but it leads me to think of a situation in the recent past at a different family-friendly activity center (NOT Santa’s Village) where a child got scared on a ride, climbed out, fell off the ride and passed. Sometimes we should expect measures that aren’t just based on guidelines.

All-in-all, here is what I can tell you: My kids really enjoyed the park. They had a blast on the rides and I enjoyed seeing them have a great time. I had a few other minor concerns, but those were issues that you would find anywhere, so they really aren’t worth mentioning. If you are in East Dundee, you should go for a visit. Armed with a little additional knowledge, hopefully you’ll be prepared for a few things that I wasn’t.