Fine Print: I was given a copy of the movie for review and one is being given to a reader. All opinions and statements below are my own. 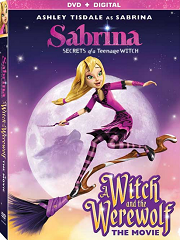 If you are an old fogie like me, you hear the words Sabrina The Teenage Witch and think of Melissa Joan Hart chatting with her cat Salem. Well now Sabrina is an animated character voiced by Ashley Tisdale!

Sabrina (Tisdale), everyone’s favorite half-human, half-witch, is back in a magical movie adventure filled with spells, excitement and tons of fun. When a magic jacket turns Sabrina’s friend Harvey into an uncontrollable werewolf, Sabrina’s off on a wild chase between the human and witch worlds to stop his rampage. Join Sabrina on her bewitching escapade to find a cure and save the day!

My son and I got to watch this movie and he really enjoyed it. Here is his take: “The best part about the movie was that the girl who plays Sabrina is the same girl who plays Candace on Phineas and Ferb. That’s just awesome. I do think that girls will like this movie more than boys, but it was really funny and there weren’t any scary parts for an 8 year old. Little kids might be a little freaked out by the werewolves, but they’re not really scary for older kids.” So there you have it! I have to say that I enjoyed hearing Candace’s voice as well, but Sabrina is a fun tale in it’s own right. It’s not the same show that we knew as kids, but it’s a harmless animated film that your kids will enjoy.

To get everyone exited about this animated witchiness, I am giving one lucky winner a copy of the Sabrina – Secrets of a Teenage Witch: A Witch and the Werewolf DVD!

To enter this giveaway, complete any or all of the options listed below. Giveaway ends 9/14. Good luck!