Fine Print: I was given a copy of the movie for review and one winner will receive a copy. All opinions and statements below are my own. 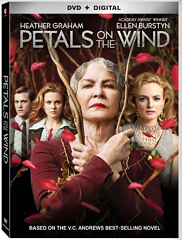 Most of you know that I’m an avid reader and as strange as it might seem, I reread the entire Flowers In The Attic series about 6 months ago. Yep, all five books. So when I heard that they were releasing a new version on TV, I can’t say that I wasn’t concerned. The movie released with Kristy Swanson years ago was a disappointment to book enthusiasts (I won’t even go into how wrong the ending was) and this is a book that is VERY difficult to capture on film. That being said, you know I had to watch it. And actually, it wasn’t bad! (THERE ARE SPOILERS BELOW! STOP READING NOW IF YOU DON’T WANT TO READ THEM!!)

The controversial element of the brother and sister, Chris and Cathy and their relationship was one that was basically left out of the original film. I’m very happy to say that book loyalists will be happy with this version. The Grandmother’s (intentionally capitalized!) terrorism of the children, the craziness of their mother and the incest are all present. This continues on in the sequel, Petals on the Wind.

Petals on the Wind continues to follow the twisted plight of the Dollanganger family as they attempt to put their sordid past behind them. But, as they soon discover, certain secrets can’t be left behind. When Cathy finds herself in an abusive relationship, Christopher and Cathy are forced to face their forbidden feelings. And as tragedy strikes again, Cathy returns to Foxworth Hall to confront her grandmother and seek revenge on her mother. Christopher runs to Cathy’s side, and the two are determined to start over again — together.

While I was disappointed that they didn’t discuss very much about the involvement of their guardian (Paul) with the Dollanganger kids, they did a stellar job with Cathy’s relationship with Julian and the torment involved. The Grandmother is just as crazy and the mother just as awful. Book loyalists will also be pleased at the very last scene’s nod to the rest of the books.

To get everyone excited about the release of the movie, I am giving one lucky winner a copy of the Petals On The Wind DVD!

To enter this giveaway, complete any or all of the options listed below. Giveaway ends 10/23. Good luck!