*Note – this is a sponsored post on behalf of Medieval Times. All opinions and statements are my own. 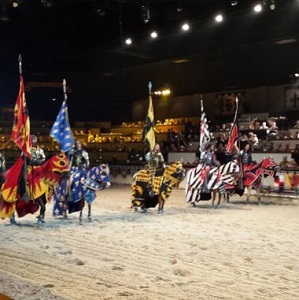 If you’re looking for something fun to do with the family, you have to check out Medieval Times! There are many locations around the country, but the one closest to me (and the one that I visited) is in Schaumburg, IL – about half an hour outside of the Chicago city limits.

Medieval Times is a “dinner and a show” where viewers get to watch six different knights perform events and try to “win” the tournament. Upon entering the Medieval Times area, each family is assigned a team section. You get to wear a crown with your knight’s colors (we were red & yellow!) and cheer for your knight all through the tournament. 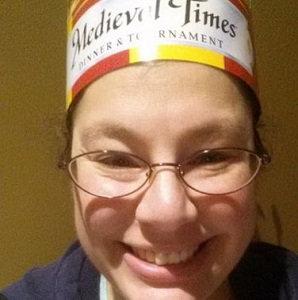 My kids, my husband and I were sat at a long table facing the arena when we entered. We were asked questions about both allergies and whether anyone is a vegetarian (which I LOVED) and then had our beverages delivered. After that, the show began! We watched a king and his princess discuss something (that I honestly couldn’t understand, but I’m sure it was something very concerning) and a “bad guy” come to threaten… something. Honestly, you didn’t have to understand what was happening in the “story,” you just enjoyed the show!

During this performance time, our server began to pass out the meal. Our server was fantastic (hey Erik!!) and I would highly recommend asking for him if you should go to the location in Schaumburg. We were given a piece of garlic bread, about 1/2 a chicken (called a baby dragon), tomato soup (dragon blood), a tasty potato (dragon foot) and a corn on the cob (dragon ear). For dessert we got an apple strudel tart. We were told by our server that this was actually part of the dragon as well, but he thought we should guess which part rather than having him tell us. My daughter was VERY observant and continually told us that these were not pieces of dragon. LOL

The food was very good. There are no utensils at Medieval Times, so you drink your soup and eat everything else with your hands. It’s fun! 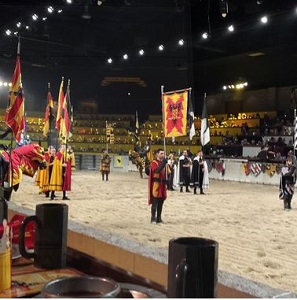 There were lots of events where we watched the knights compete – everything from jousting to trying to catch rings on a lance. When a knight won a round, he was given carnations to pass out to the girls in his section. My daughter was very happy to have gotten one. My son wanted them to quit with the flowers and compete already! In the end, our knight won. Everyone was happy – and very full!

Medieval Times is a great time for the family and many people have their celebrations there! Everything from anniversaries to birthdays to wins on a sports team. The king and princess make all of those announcements at the beginning of the show. It’s very different from almost anything you’ve done, so give it a try!