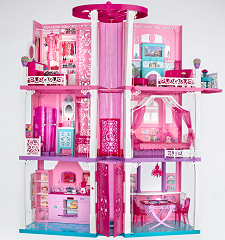 Can I reiterate for you, this thing is 3 1/2 feet tall and has TWO elevators. Girls in my day were not dreaming big enough!!

Over the summer, Barbie went on a multi-city tour to figure out where she wanted to move. She even listed her home with Josh Altman (of Million Dollar Listing fame – I love that show!) to get a great price. She thought she might not be fit for Malibu anymore, but I guess she changed her mind!

“After all her travels, Barbie realized that Malibu is where her heart is and has decided to stay there in a newly renovated Dreamhouse! Barbie’s brand new 2013 Dreamhouse is now available at retailers nationwide for every girl who has always wanted a Dreamhouse of her own. The newly renovated Dreamhouse is three-stories, has 6 rooms, two elevators, and unmatched “ocean views” of the Malibu coastline. And of course her new Barbie’s Dreamhouse features a few luxe details – like pink stainless steel kitchen appliances and a walk-in closet with its own elevator – a first for the fashion icon.”

I recently got the opportunity to check out the Barbie Dreamhouse for 2013 and goodness! It’s huge! When the box arrived, my daughter’s jaw almost hit the floor. She walked around the box and her eyes slowly bugged out of her head. It was truly hilarious.

The next day, my husband and I spent 3 full hours putting it together. If I have one complaint about this toy, it’s that it is a VERY complicated unit to set up. It took both of us to make it work and my daughter put on most of the stickers (quite obviously the most fun part!) However, once we got it all put together, my daughter had a blast. Several of her Barbies have moved in and they all have separate areas to play and live in. 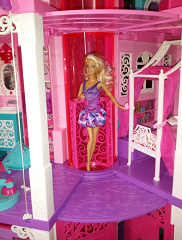 The Barbie elevator is a lot of fun. You can actually hook your Barbie into it so that she can ride up and down independently from you. Ours keeps getting stuck at the second floor, but I’m sure I must’ve done something wrong with installation. I’ll check that out again this weekend! 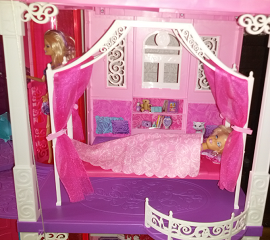 My daughter’s favorite part of the entire set is the canopy bed. Different “people” take turns napping throughout the day and she thinks it’s the most beautiful piece by far. She has her dolls play in the shop upstairs and wheel things down in the closet/dumb-waiter (the second elevator) to get new inventory.
This Barbie Dreamhouse is available at Walmart and retail stores nationwide for only $184.99!

Fine Print: I participated in this sponsored campaign for One2One Network. I received monetary compensation and product to facilitate my post, but all opinions stated are my own.”